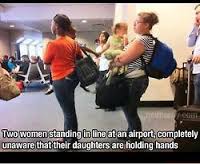 Situations, circumstances and contexts are important factors that influence our behaviors, attitudes and perceptions. Here’s why! The other day, while perusing the mall, I took a break from shopping to get something to eat. I headed for the food court, and decided to grab a bite from the Burger King. Standing in line ahead of me was a young African-American mother and her two children. One child, a boy, was crying and begging for a toy that he had just seen in a toy store. The children were about 18 months and 4 years old, I would guess.

So, she was holding the youngest child on her hip, and the 4 year old was standing beside her. Knowing children as I do, this 4year old had to have been crying and whining for quite some time. I mean he was uncontrollable and inconsolable, and certainly this woman was at her breaking point. They had probably been going in and out of stores for some time. Taking children shopping, small children, into store after store, in a mall, is challenging for the strongest of mothers.

In line with this crying 4-year old, they had  everyone’s attention. Well, she turned to her son and smacked him, but good. No, not in the face, but on his rear end. Not just one time, but she began to spank him, and it was as though she unleashed all  frustrations on this child. The result: more crying, and with all eyes upon her, she turned and looked up at one of the onlookers and said,” What are you looking at? Mind your business!” Oh, she had ‘attitude’, and I get that, though.

The cashier from behind the counter called out, “Next customer”, and the woman calmly placed her order. I know you’re thinking that she should have left the children at home. Some may even consider her an unfit mother, by witnessing that form of discipline and the pain inflicted upon her child. We may even consider notifying the authorities, or a child welfare  agency, who would have likely removed both of her children from her care. We don’t know whether she had any more children at home, but such an act, with good intentions, would have caused her family to enter the ‘system’ of monitoring, reporting and  referral mandates.

Would that have solved her problems, though? Would she have become a better, more effective and tolerant parent? Not necessarily! She would have to jump through hoops, and that is assuming she wasn’t involved already-social service, etc…However, if we take time to look beneath the surface, we may see that she is a wonderful mother, a single mother who works 6 days a week to take care of her family.

We may want to consider that everyday she worries about managing her budget while trying to pay rent to keep a roof over their heads. She struggled to keep food in her refrigerator, make sure that everyone had clothes that fit, and the baby had diapers. Her electricity bill was due,  Also, there was the need for transportation/bus fares for the daily work commute,  childcare fees, and so this mother juggles all of her take home pay to meet these demands.

She ran short of money this month, and went to a friend for a temporary loan.  Unfortunately she didn’t get it, and ended up going to her local social services office for assistance. She arrived early in the morning, which also meant taking a day from work. She rarely misses even 1/2 day from work, and usually doesn’t leave the offices until late afternoon. I would say that she was already frustrated before letting loose.in the line at Burger King. Had you not known this background information, the conclusion regarding her behavior or her response to her child in the midst of a tantrum, would be that she was unfit, abusive and should take parenting classes, and anger management too. Is it her fault completely, or the ‘system’ that surrounds her daily life? Just asking.

My conclusion regarding this scenario is that by anyone jumping to a conclusion that would have contributed to her stress, disrupt and traumatize this family, we would essentially punish everyone for her anger and form of discipline. Too often, as we encounter parents forced to make disciplinary decisions in public, we deem that parent ‘uncivilized, mean, too harsh. Rarely does anyone take into consideration the events that may have led up to the yelling, cursing, and threats they ubleash upon a child. We shake our heads and think, “shame, shame, shame” . Heaven forbid the parent is from a different race, because stereotyped perceptions also emerge.

Anyway, what happened to this boy? Well, he got an ice cream cone with his meal at Burger King, and she promised him the toy, if he was an obedient child with the babysitter and at home. That is fair, no? So, the moral of the story is: Never judge too quickly until we have walked a mile in the shoes of another. Also, if we find ourselves facing such moments, vow to be part of the solution, not the problem. Offer a hand in some way, or perhaps distract a child, empathize with a parent, nicely and respectfully offer a tip from your best parenting practices….part of the solution!