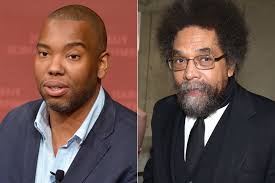 Every generation has great minds, profound thinkers in our society. Well, in this, the 21st Century, among the great minds within the African-American community, I think of two in particular. They are Cornel West and Ta’Nehisi Coates. Mr. Coates comes to us as an accomplished author, journalist and philosophical historian. Dr. West is a philosopher, activist, author and social critic. He is also a distinguished Professor at both Harvard and Princeton Universities.

We know that Malcolm and Martin were at odds as political activists on certain strategic and philosophical aspects of the fight for civil rights in the 1960s. The common threads which ran through both individuals’ vision centered around Black people’s treatment and mobility in America. The debated aspects of their visions were about the ‘how’or the most effective pathway to achieve full equity and equality for African-Americans and other people of color. The goals are the same, each with slightly different parameters of achieving equitable civil, legal and equal human rights in America.

Ta’Nehisi Coates has a philosophy that lays out a path to ‘freedom’ and equality in America for African-Americans, as well. He promotes the case for reparations as a sort of ‘mea culpa’ by whites to blacks. This would help to level the playing field and make amends, of sorts, for enslaving African ancestors, to be paid to the living descendants. Of the nuanced paths forward that each philosopher outlines, they are, however,  in agreement on the case for reparations. A recent Twitter ‘war’ ensued and rather insulting statements were made, and in contrast with the disagreement between their predecessors[King and X], theirs were aired in a public forum and  in real time.

Regardless of their differing perspectives regarding American socio-political structural inequities, we shouldn’t fall prey to divisive rhetoric. The goals, ultimately, are the same, and it’s only the paths that are different. Perhaps, just perhaps, we might consider that there’s more than one path to equality in this country.

Read the New York Times article in its Race/Related series. Follow the link: