I grew up in a grandfamily household for the greater part of my childhood. My mother’s parents were like my own parents. In fact, I called my grandfather ‘Daddy’. My living with them was the evidence of their support for my mother’s quest for independence and self-sufficiency through career preparation. She was a divorced young woman who wanted to establish herself and pursue her excellence in ways she couldn’t while with my father.

She decided to graduate college and then graduate school in New York to begin her career as an educator there. I was, and still am an only child and my grandparents had a huge house. Besides, they wanted to ensure that I was close. It was a win-win for all, I guess. A mixed bag for me, because though I was very happy, incredibly spoiled and well loved, there still was a missing component-my mother’s presence. My mom and I spoke often by telephone and she visited all major holidays while summer vacations were spent in New York with her. She attended most of my school functions, and when she did, I was ever so proud. She was so, so pretty-a former high school pageant winner.

When my mom wasn’t around, it was my grandfather who attended or accompanied me to school functions. I loved him so dearly. Going to school in the South with my grandparents was wonderful, and I got all that I wanted and more. My grandmother bought everything, literally, and my grandfather nurtured. After a while, when my mom was established in NY, she asked that I come and live with her. I refused because I felt so grounded with my grandparents.

My grandfather, a military veteran, and I went everywhere together. He loved to travel and so did I, especially when it was with him. When people saw us for the first time, it was assumed that he was my father, and I was proud. I was his complexion, yet he had blue eyes. He invested in real estate and often we would survey prospects or new acquisitions together.

My situation in a grandfamily may be somewhat common, but the reasons for being there may not have been the ‘usual’, or as we’ve come to perceive as the back story. Many children find themselves living with their grandparents because a parent is not present for a variety of reasons and is unable to be there with and for their child. Either addiction, incarceration or death seems to precipitate a grandfamily situation. Not mine. As much as it is optimal that children are raised by parents, there are tremendous benefits for both child and caregiver, in either a grandfamily or a multi-generational household. 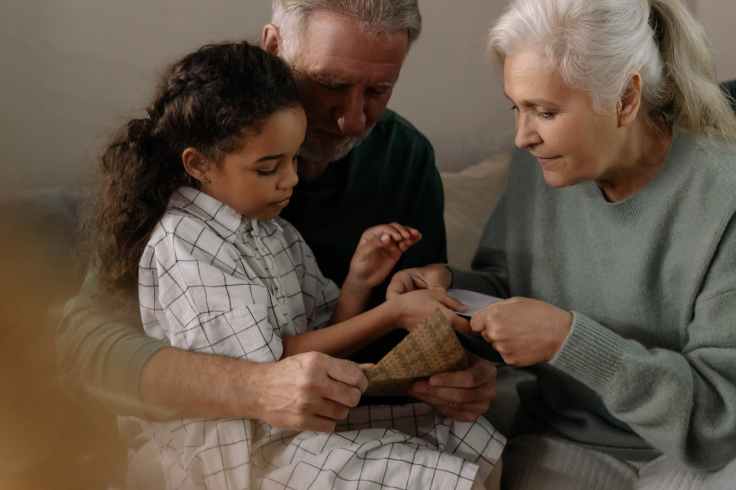 Photo by cottonbro on Pexels.com

I was surprised to learn recently that 2.7 million grandparents are raising grandchildren nationwide and in the state of Massachusetts,for example, more than 27,000 grandparents are primarily responsible for their grandkids, and about 115,000 grandchildren are living with a relative other than a parent, according to various sources, including 2020 census data. The more surprising statistics came from U.S. Census data for Barnstable County from 2007 to 2016 that showed an increase of more than 75 percent of grandparents “living with grandchildren” under 18, from 2,145 to 3,804, and grandparents “responsible for their grandchildren” almost tripled during the same period, from 579 to 1,629, while the numbers increased only slightly statewide.

Nationwide, kin caregivers, in addition to being older, are disproportionately Black or Native American and also more likely to be impacted by the pandemic and die as a result. They need help making alternative caregiving plans and accessing services that may only be available to parents or those caregivers who have gone through a formal process to obtain a legal relationship to the children. Supporting these unique family units, programs and policies must address their special needs and challenges they face.

Many of the grandparents who are primary caregivers are age 60 and over. This presented challenges for them during the pandemic because seniors, a vulnerable population, were told to distance themselves from children.  Decades of research proves that being raised by loving kin is the best option for children whose parents cannot raise them, whether due to death, disability, or any other number of common reasons. These children have better outcomes than those who live with unrelated foster parents. Grandfamilies keep children safe, loved, stable, and connected to siblings.

Those statistics are staggering and speaks to a larger issue. One of these issues concerns the heavy concentration of drugs in black communities. There seems to be a liquor store on every corner in their neighborhoods, too. Historically, black families were deliberately separated from one another, for profit or punishment. There was no value in keeping black families intact-together. Then came the welfare system that provided assistance to children in families only if the father or male head of household was absent. If employed, no subsidy was provided, even if salaries were menial and they still lived below the poverty line.

Also, when mothers went to work, became addicted to drugs or just struggled to the point where she could not provide the care and safety her children needed, grandparents stepped in. As in my case, and countless others, a newly divorced mother, married soon after high school and  her college education halted by a sexist, insecure and abusive father, when she left, she moved back in with her parents. Especially in places like the South, career options and opportunities were few  outside of domestic or secretarial work. My mother wanted more. She wanted to teach and there began the pursuit of independence and marketability.

With the support of my grandparents, she started that journey, leaving me in their care. Fortunately, they were wealthy enough that child welfare and other social service programs were totally unnecessary. Though assistance of all kinds help, this was not a legal arrangement; it was strictly familial kinship care.

Another concern is the mass incarceration of black men due to strategic over-criminalization which consistently led to substantial numbers of female- headed households and the grandfamily-kinship care. For indigenous peoples, their numbers for kinship care and grandfamilies takes another, yet similar turn. While [the new]Americans were still committing genocide and driving people off of their territories, the killings were also indiscriminate. Both mothers and fathers and children were being slaughtered as they fought to keep what was their land.

Once America and Canada were fully colonized, the native groups were subject to a number of crippling conditions. One of the relatively recent conditions demanded a standard ‘colonial’ education of the children. Native children were often sent away, mandated to attend boarding and residential schools. This effectively separated children from parents who may have died or were impoverished and deemed unfit. It was cloaked in being ‘positive’ for families. The opposite usually resulted. Cheap labor, of the domestic type, was the other side of that coin. Children were being socialized to work for wealthy whites and were being sent away from relatives and loved ones . Situations such as these are not ever in the best interest of the families, or the children. Rather, it looked too eerily as a new form of slavery. Fortunate for the family and the child was it when grandparents or others could support themselves and comply with state mandates.

The bottom line is that as there are more and more grandfamilies emerging and being recognized as such, policies and programs NOW have to include them in budgeting for entitlements and services. This begins at the federal level where inequities begin,  and are trickled down around the country. There is a long history of inequitable supports for children based on who is raising them. If raised in foster care, children receive a monthly maintenance payment, Medicaid, free or reduced price school meals, SNAP[Supplemental Nutrition Assistance Program], help enrolling in school and transportation to their home school and education and independent living vouchers.

On the other hand, children who go to live with kin, whether through foster care or not, typically do not receive any of these supports, either automatically or not at all. Typically, the main and only source of assistance to grandfamilies is TANF[Temporary Assistance for Needy Families], which replaced AFDC[Aid to Families with Dependent Children]. TANF serves four purposes, one of which is to keep children in their own home or with relatives. Unfortunately, the majority of children in grandfamilies do not receive any TANF support or any other type of ongoing financial support.

Aware that black and indigenous children are more likely to live in grandfamilies than white people, and that grandfamilies are inequitably supported, we must explore this through an equity lens. To better support grandfamilies and the children whom they care for, racism must be addressed in the examination of inequity to remove them. In 2012, almost half[48%] of children who lived with grandmother only and no parents in the home, lived in poverty. These children were disproportionately black[42%].

In the near future, we will discover more about the forgotten family: the grandfamily, their strengths and challenges and explore more ways that we can support grandparents as they support their grandchildren. In the meantime, can you talk about your grandfamily?